Testing esProc and Oracle on the same hardware for single machine performance, to compare the two for performance difference either in large data volume single task computation or small volume multiple tasks concurrent computation use cases.

Algorithm category:
Testing the performance of several typical SQL algorithms, including data scan, grouping, join and large grouping, etc.. Note that the use of these simple algorithms is for better understanding and direct comparison of the performance, not because esProc and SQL are identical to each other. In fact, the two of them focus on different things. esProc is good at procedure computation with more
complicated business logic, while SQL is for computation of average complexity.

Complicated algorithm can be realized with different SQL execution plan, which is out of manual control, and thus not good for comparison. We'll not do such test.

Category of Use Cases:
Each algorithm are tested with multiple use cases according to the width of the table, data types, etc..

Among them, the purpose for large grouping use cases is to test the scenario when the resulting data sets of the grouping is too large to be fit in the memory. So this report will only test the situation of parallel computing with 100G large data volume, rather than concurrent computing with small data volume.

Note: the article esProc Oracle Single Machine Performance Comparison Process is an appendix of this report. Please refer to it for details such as data structures, test code, test reproduction, etc..

The volume of the data is decided by the amount allowed by exported text file.
During the single machine test, esProc uses proprietary file format.

4.1.Data tables and the associated tables

Fact tables are the main data source for this test, and are used in scan, group, join computation. Tests are done for both large and small data volumes, with are controlled by inserting different rows of records. 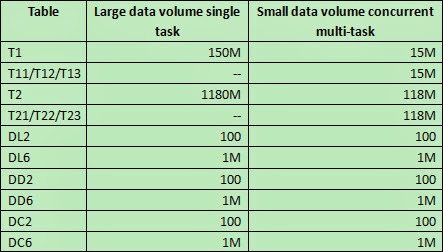 To make sure that esProc and Oracle is computing against exactly the same data, we will export the data generated in Oracle to a binary file format defined by esProc, as the data source for esProc during the test.