Colon (:), comma (,) and semicolon (;) are used as separators of function parameters in esProc. Their priority decreases in turn.
The most common method is to use commas to separate parameters, which is in line with function syntax in most programming languages. For example:

In this example, parameters of if(), create() and T.insert() function in A3, A4 and A5 are separated from each other by commas.

Some functions have “coupled” parameters, which are closely related or work together. In this case, a colon is often used to separate them.

For example, for if() function in A3, each condition corresponds to a returned result and colons are used to separate the results. In the in() function used in one condition, 150 and 180 are also separated by a colon and together they form a numerical interval [150,180]. In A5's T.insert() function, field value and field name also come in pairs with colons in between to separate them.

In some functions, indicative parameters can be added to certain parameters to change the computational method relating to them. In this case, colons are usually used as separators. See below:

Both A2 and A3 sort records of cities according to state ID first, then sort by name if cities belong to the same state. Difference is that -1 is appended after NAME in A3’s function, meaning that sorting by name is in a descending order.

Sometimes, parameters in function can be divided into different parts according to their roles. Semicolons are usually used to separate these parts.

T.switch() function in A4 transforms different fields into records of another table sequence, and a semicolon is used here. Besides, comma, colon and semicolon are all used in A4 as separators. This kind of code writing creates clear layers for function parameters.

2.Omission of function parameters
Some esProc parameter functions have default values and, therefore, can be omitted, making functions more concise.

The parameter after a colon is generally used to complement another’s computational model. If default mode is used, the parameter can be omitted. For example:

In A5, parameters after colon are used to designate field names corresponding to certain values when inserting records. Parameters for designating field names can be omitted in A6 because it uses default field names to set field values one by one.

But colons cannot be omitted when they are used to separate intervals:

For parameters separated by semicolons, the semicolon can be omitted if there is no parameter after it. For example, if n is not set in A.top() function and only the top one is needed; or when the transformation of a certain field is not needed in T.switch() function.

When commas are used as separators, they should generally be retained even if parameters are set by default. For example: 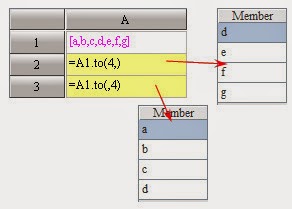