Since sets are commonly used in esProc, the latter provides comprehensive set operations.

The most basic set in esProc is sequence. Let’s look at some basic binary operations between two sequences A and B.


Concatenate: Concatenate the two sequence straightforwardly, of which the member of B is added behind the members of A. If A or B or both A and B are the single-value member instead of sequence, then it will be handled as a single member sequence.


Union: Join the two sets and remove the members of B that already exist in A. If one of A and B or both vales are the single-value member instead of sequence, then you can take it as single member sequence to process.


Intersection: Intersection set of A and B. Get a sequence composed of members that not only exist in A but also exist in B.


Complement: Members in A but not in B. If B is not a sequence, then treat it as the single member sequence.


A|A|…|A, copy A for k times, positions of k and A are interchangeable in the expression. 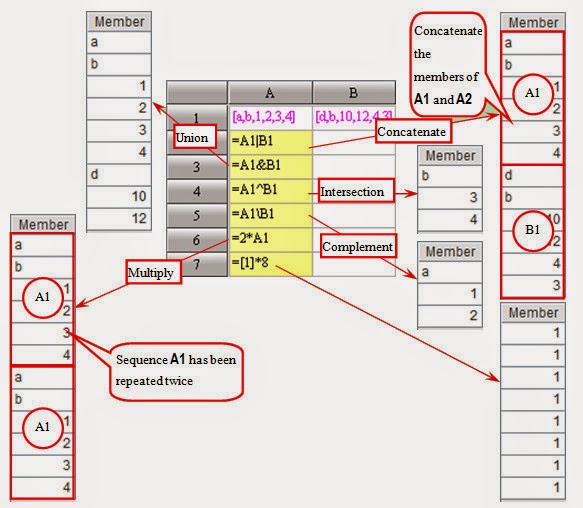 These basic operations - concatenate, complement, intersection and union - can also be used to deal with more complex set operations. Such as, to seek the "inverse intersection" of sets A and B, i.e., the set composed of all that is not the common members of A and B.

The "inverse intersection" of two sets is the complement of their union and intersection. With this kind of transformation, more complex binary operations will be completed.

Two sequences which have the same length will perform the alignment computation on members, and return a new sequence.

In esProc, the function cmp(A,B) can be used to compare the sequence A and B.


Compare the member values of two sequences at the same location one by one, and return the 1 or -1 when encountering the first unequal member, if A is identical to B, then return 0. Specifically, cmp(A) or cmp(A,0) will compare A with the sequence with the same length and members are all 0, i.e. cmp(A,[0,0,…,0]).

Comparison of two sequences can be briefly expressed as A==B, A>B.

Note that a sequence in esProc is an ordered set, so order plays an important role in comparing the size of two sequences A and B. A.eq(B) is used to see if the two sequences have common members.

Email ThisBlogThis!Share to TwitterShare to FacebookShare to Pinterest
标签： and, esProc, opterators, or, plus, set