A1 gets employee information. After computed columns FULLNAME and AGE are added into A1’s table sequence, A2 returns the new table sequence. Compute employees’ full names and ages.
The following is the table sequence in A1: 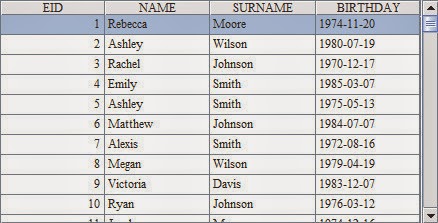 After the computed columns are added, table sequence of A2 becomes like this: 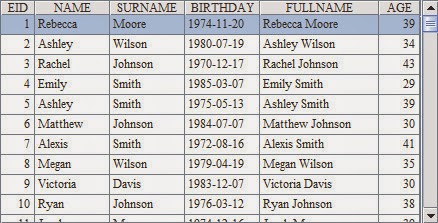 A1 and A2 retrieve respectively data of database tables: STATES and CITIES: 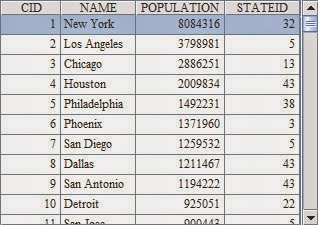 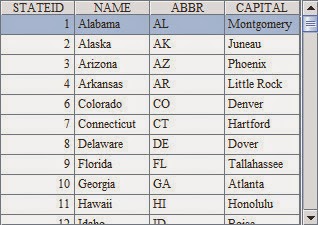 CITIES is correlated with STATES through STATEID field. This kind of storage pattern in databases can keep data consistency, make data easy to maintain and save storage space.
A3 adds State field as a foreign key in CITIES to store record of state in which cities located. Again, A4 adds SA field in CITIES to list abbreviations of these states, making them convenient to be looked up for the future. A5 adds Cities field in STATES as a foreign key to store records of cities of every state.
Execute the program and data of A4 are as follows:

State field contains records of states information, double-click and see more.
Data of A5 are as follows:

Cities field contains records of cities of each state, double-click to see more.
It can be seen that, through foreign keys, in fact data of both A4 and A5 has obtained all information of the two tables: STATES and CITIES, in the original database, thus relationship between tables is realized. Note that there are many types of foreign key fields. Data of foreign key State in A4 are records while those of foreign key in A5 are record sequences, i.e. sequences of records.

Note that here the type of foreign key field is record. Computed results of A6 are as follows:

Or, foreign key fields can be used in sorting criterion, for example, sort the states in descending order according to the number of cities records of the current state:

Note that here the type of foreign key fields is record sequence. Sorting results of A6 are as follows: 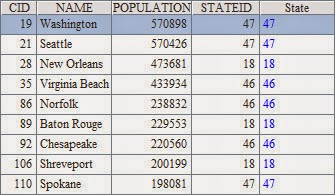