What if the data to join are all from the cursor? As we know, it is usually impossible to retrieve all data in the cursor. How can we join these data then? In esProc, you can use function join@x() to join the data from multiple cursors. For example: 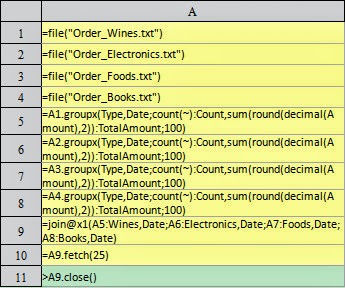 Once the cursor is aligned joined, a cursor will be returned. From which the retrieved result is similar to the TSeq joining, and all fields are composed of the records. Thus, when retrieving, you must note that the joined records take more memory than those in the normal cases. In addition, since data is composed of records while not values, please note the requirements on writing the expression, in particular the re-joining with the result cursor, when using the result cursor for computation.
The result of aligned joining of cursors can also be used to inherit such as filtering or generating, for example: 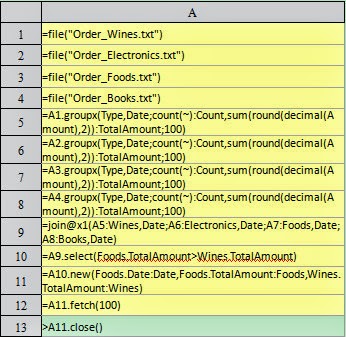 In using the aligned joining with cursor, you must remember that the data in the cursor cannot be read into and maintain in the memory during retrieving the data. Instead, they can only be traversed for once from the first to the last. Therefore, regarding the join operation, the data in each cursor must be sorted, which is different from processing the multi-table join for database, and quite unlike the join() for normal TSeq. As shown in the above example, the data in A5~A8 are ordered by date, which can ensure the computation is correct when joining.
In order to explain this problem, we create a cursor using two in-memory TSeq. Let’s have a look: 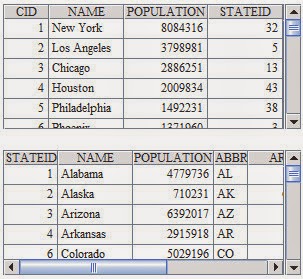 In A5, you will see the alignedjoining result:

The data in cursor is different to the normal TSeq. When looking for the New York state corresponding to the New York city for joining, the cursor of State data has already moved to the entry 32, and the previous records are unfindable for later computations. So, for most cities, the corresponding state is unfindable like this. Because the option @1 and @a are not used in function join@x() to specify the left join or full join, only cities finding out corresponding state are returned, and the data are quite few.
If having the city information sorted first, then you can have the normal result of joining:

In A1, the data are sorted by STATEID:

In A6, you will see the joining result: