During database application development, we often need to handle complicated SQL-style computations. One of them is the ungrouping, that is, the opposite process of grouping and summarizing which requires, for example, splitting each record into multiple records. We cannot realize the operation in SQL without taking great trouble. The code is so complicated and difficult to understand.

By contrast, esProc provides easier way and thus simpler code for realizing the ungrouping. The following are two examples.

We are asked to split packGather into tables of packages, that is, list packages separately and number each of them. Take product b as an example, there are 3 records in the table after it is split.

The following esProc code can be used to solve the problem:

A1：Select all the data from the database. They are as follows:


The function of conj function is to concatenate data. For example, split the first record in A1. The corresponding code and result are as follows: 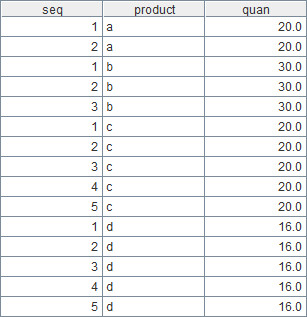 A2 represents the final result of this example.

Some of the data of contract are as follows:

This piece of code uses periods function to generate a sequence of dates starting from the ending date of a contract to the current date. # represents the current sequence number in the time sequence. The final result is as follows: 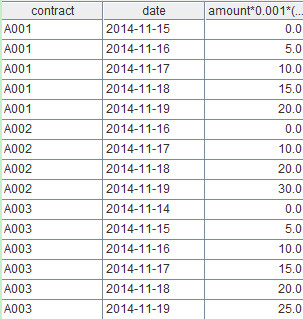 Note: esProc program can be called by a reporting tool or a Java program in a way similar to that in which a Java program calls an ordinary database. The JDBC provided by esProc can be used to return a result of the form of ResultSet to the Java main program. Please refer to the related documents for details.