Now let's look at the method of computing link relative ratio and year-on-year comparison in R language through an example.


Compute the link relative ratio and year-on-year comparison of each month's sales amount during a specified period of time. The data come from orders table sales, in which column Amount contains order amount and column OrderDate contains order dates. Some of the data are as follows:

After computing, some of the values of database frame filtered are:

2. agged<-aggregate(filtered$Amount, filtered[,c("m","y")],sum), this line of code summates the order amount of each month of each year. Note that in the code, the month must be written before the year though data are grouped by the year and the month according to business logic. Otherwise R language will perform grouping first by the month, then by the year, which will get result inconsistent with business logic and make data viewing inconvenient.

After computing, some of the values of data frame agged are:

At this point, some of the values of data frame aggedare:

4. result<-agged[order(agged$m),], this line of code sorts data by the month and the year. Since the data of the year are ordered, we just need to perform sorting by the month. result$yoy<-NA initializes a new column which will be used to store the year-on-year comparison of sales amount.

Now the value of result is:

The only weakness of this piece of code is that it cannot use the loop function of R language, which makes it a little lengthy. But compared with the difficult operation of link relative ratio, maybe a longer but simple code is better.

The final results are as follows: 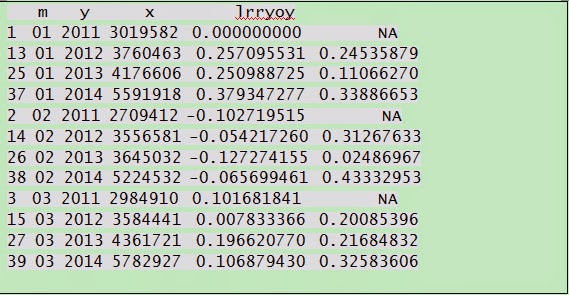 Python, esProc and Perl, all of which can perform structured data computation, can be used to handle this case. In the following, we'll briefly introduce esProc and Python's solutions.

esProc
esProc is good at expressing business logic freely with agile syntax. Its code is concise and easy, as shown below:

In the above code, groups function is used to group and summarize data by the year and the month. The derive functions in A4 and A6 generate link relative ratio and year-on-year comparison respectively.

As can be seen from the code,esProc also uses[-N]. Different from [-N] in R language, it doesn't represent removing the Nth row; it represents the Nth row counted from the current line. For example, [-1] is the previous line. In this way, the operation of link relative ratio can be simply expressed as (x-x[-1])/x[-1].But R language hasn't expressions for relative positions, which makes its code difficult to understand. 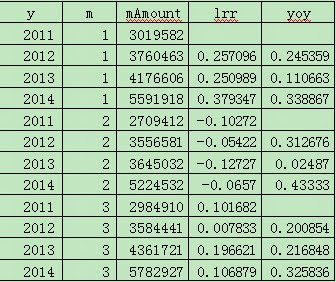 In the code, pct_change() function is used to directly compute the link relative ratio, which is more convenient than the method used by R language and esProc. But this kind of function is not universal and can only deal with isolated cases. When it is required to compute link relative ratio or year-on-year comparison, Pandas can only complete the task by combining div function and shift function, which makes its code more difficult to understand than R's.

In computing year-on-year comparison, Pandas' code is as lengthy as R's. This is because Pandas also cannot use if function in loop function. I'm afraid cooperation of apply function and lambda syntax is needed if we want to write simpler code. 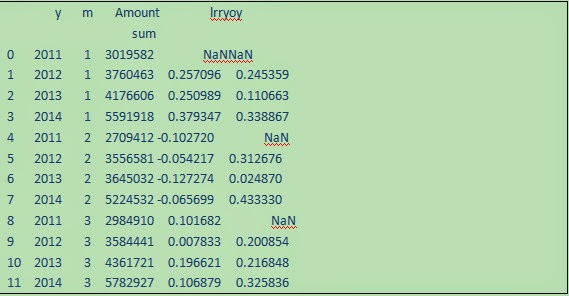 Please pay attention to the following easy-to-get-wrong details:
1. The code must besort_index(by=['m','y'])when we perform sorting by the month and the year. The simple formsort(m), which used in R language and esProc, is not allowed.
2. Pandas has the assignment syntax as result.loc[row_index,'yoy'’]=value. But when assigning value to a certain element in data frame, we should write the code asresult.ix[row_index,'yoy']=value.
3. When iterrows()is used to perform loop, its loop number row_index is index instead of row number. To make the row number conform to the index, reset_index() should be used to reset the indexes.
发贴者 Unknown 时间： 8:26 PM