Principle and Use of External Memory Grouping in esProc

But the case will be different in processing huge data, for the records cannot be loaded to the memory all together and distributed into each group. Other times the number of groups is huge and the grouping and summarizing result cannot even be returned all at once. In these two occasions, the external memory grouping is required.

Let's create a big, simple data table containing employee information, which includes three fields: employee ID, state and birthday. The serial numbers are generated in order and the states are written in their abbreviated forms obtained arbitrarily from the STATES table of demo database; birthdays are the dates selected arbitrarily within 10,000 days before 1994-12-31.The data table will be stored as a binary file for convenience. 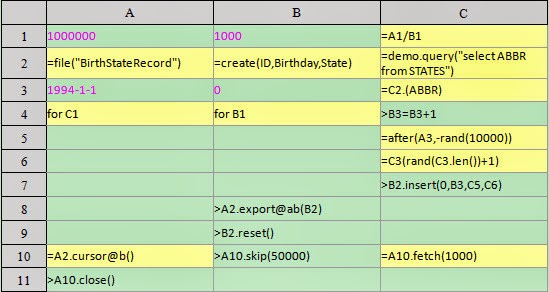 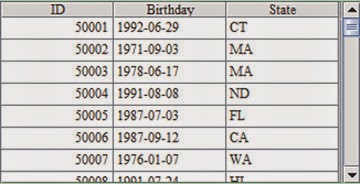 In the following, we'll take the generated data file, BirthStateRecord, as an example to explore how to group in cursor computing by directly specifying group numbers. Because the data of the big data table cannot be loaded all together into the memory, we cannot perform grouping on it as we do on an ordinary table sequence. To solve this problem, esProc offers cs.groupx(x) function which can distribute the records in cursor cs according to the computed result of expression x into groups with specified serial numbers and return the sequence of cursor. For example: 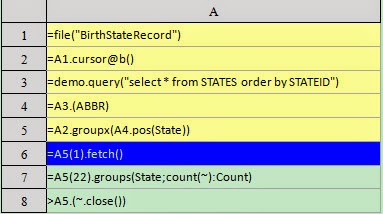 To explain the way in which cs.groupx(x) function performs grouping by using external memory to specify group numbers, the code will be executed step by step by clicking in the debugging area of the toolbar until A6. A2 creates a cursor with the binary data file BirthStateRecord. A4 creates a sequence using the states' abbreviations in STATES table.A5 uses groupx function to group data of the cursor; in this process, we need to find the corresponding serial numbers of the groups in A4 according to states and make them as the group numbers. During the execution of groupx function in A5,a temporary file will be generated for each group to record the grouping result and the sequence of temporary cursor files will be returned as follows: 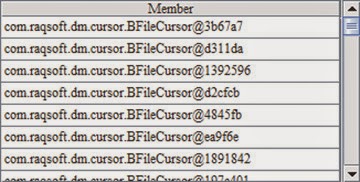 While the code in A5 is executed, external files are generated in the directory of temporary files: 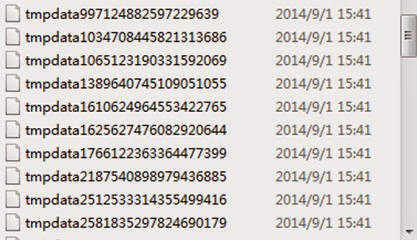 In the operation of groupx function, the number of temporary files equals that of the groups of records. We can import data from one of the temporary files:

The data A2 imports are as follows: 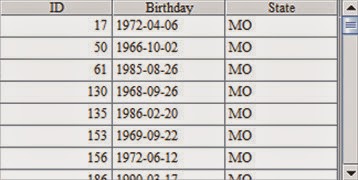 It can be seen that the data of a temporary file is, in fact, the employee information of a state. Here it is the data of the state of Missouri. Click  on the toolbar in the previous cellset file and go on with the execution of this cellset. In A8, when all cursor files are closed, the temporary files will be deleted automatically. A6 reads from the first cursor file the employee information of the state of Alabama as follows:

A7 works out the grouping and summarizing result of the 22nd group using groups function, that is, the number of employees from the state of Michigan:

It is thus clear that a sequence consisting of temporary cursor files will be returned in grouping records of cursors using directly specified group numbers. Each cursor file contains the records of a group and the data in a cursor can be further processed.

Thus we can get the result in A3: 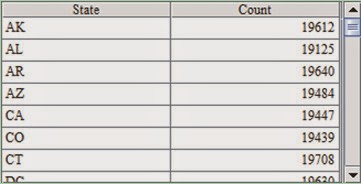 Here we notice that the groups function for grouping and summarizing will return a table sequence of the result after the computation is completed. In the operation of processing massive data, sometimes it is required to produce a great many groups and the result set of grouping and summarizing itself is too big to be returned. Such as the telecom company makes statistics of each customer's bill; online shopping malls make statistics by groups about the sales of each commodity, and the like. In these cases, the use of groups function may result in a memory overflow. We can use groupx(x:F,…;y:F,…;n) function instead to perform grouping and summarizing with the help of external memory. In the function, n represents the number of rows in buffer area. For example:

Still, the code is executed step by step until A4. In A3, groupx function uses external memory to perform grouping and summarizing. In cursor computing,groupx function is used in the operations of both grouping and summarizing with external memory and grouping by directly specified group numbers. The difference of the two operations lies in the parameters. A3 performs grouping by employees' birthdays, then summate the number of employees born each day. In the operation, the number of rows in buffer area is set as 1,000. The result returned by A3 is a cursor as follows:

After the code in A3 is executed, external files will be generated in the directory of temporary files: 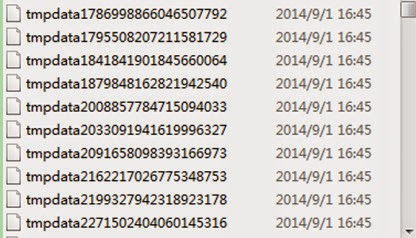 The data of one of the temporary files can be imported:

The data A2 imports are as follows: 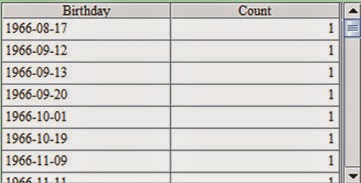 The data of A3 is as follows:

Go on with the execution of cellsets in the previous cellset file. When cursors are closed in A5, the temporary files will be auotomatically deleted. A4 fetches the first 1,000 birthdays from the cursor generated in A3, and the numbers of employees of each birth date are as follows: 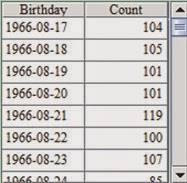