MongoDB script has limited computational ability in realizing complicated operations, so it is difficult to solve problems of this kind using it alone. In many cases, you can only perform further computations after retrieving the desired data out. And there is no less difficulty in trying to realizing this kind of set operations with high-level programming languages like Java. In this case, you can use esProc to help with the computation in MongoDB. An example will be provided for explaining how esProc works.

A1: Connect to MongoDB. Both IP and the port number is localhost:27017. The database name, user name and the password all are test.

A2: find function is used to fetch data from MongoDB and create a cursor. orders is the collection, the filtering condition is null and _id , the specified key, won’t be fetched. It can be seen that esProc uses the same parameter format in find function as that in find statement in MongoDB. esProc’s cursor supports fetching and processing data in batches, thereby avoiding the memory overflow caused by importing big data at once. As the data size is not big, fetch function is used to get the records altogether from the cursor.

A3: Add two new columns to A2 for storing the biggest same and different numbers. And, at the same time, convert values into strings.

A4: Perform loop on the collection in A3, the loop body covers an area of B4-D10.

B4: Get the value on the current loop.

C4: Use array@s to split the column value into a sequence consisting of single characters and remove the duplicate values.

C5: If the loop position of the inner loop is the same as the current one in the outer loop, that is, they hold the same value, skip the current inner loop and move on to the next.

C6: Get the value on the current inner loop.

C7: Define two variables - same and diff – for storing the same numbers and different numbers respectively got through the current comparison. The initial value is defined as zero.

The final result after the code is executed is as follows: 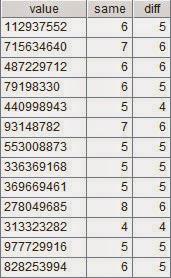 Note: esProc isn’t equipped with a Java driver included in MongoDB. So to access MongoDB using esProc, you must put MongoDB’s Java driver (a version of 2.12.2 or above is required for esProc, e.g. mongo-java-driver-2.12.2.jar) into [esProc installation directory]\common\jdbc beforehand.

The esProc script used to help MongoDB in the computation is easy to be integrated into the Java program. You just need to add another line of code – A11 – that is, result A3, for outputting a result in the form of resultset to Java program. For the detailed code, please refer to esProc Tutorial. In the same way, MongoDB’s Java driver must be put into the classpath of a Java program before the latter accesses MongoDB by calling an esProc program.
发贴者 Unknown 时间： 7:16 PM