It is easy for Java to connect to Hive using JDBC. But the computational ability of Hive is less than that of SQL in other databases. So to deal with uncommon computations, data should be retrieved before further operation is performed using Java. Thus the code for will be complicated.

But if esProc is used to help with the Java programming, the complicated operation as a result of using Hive in Java will become simpler. The following example will show how esProc works with Java in detail. orders is a table in Hive containing the detailed data of sales orders. Now it is required to compute the year-on-year comparison and link relative ratio. The data is as follows:

Link relative ratio refers to comparison between the current data and data of the previous period, using month as the time interval. For example, divide the sales figure in April by that in March and we get the link relative ratio of April. Year-on-year comparison is the comparison between the current data and data of the corresponding period of the previous year, which means, for example, dividing the sales figure of April 2014 by that of April 2013. Since Hive provides no window functions, it cannot complete the computation unless using nested SQL. But Hive supports very poor subquery and usually the computation should be performed outside of the database. With esProc, however, the computation can be realized easily. The code is as follows: 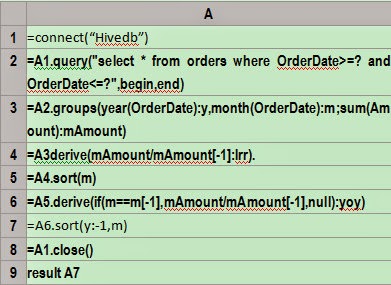 A1: Connect to the database through JDBC using the datasource Hive defined in advance.

A3: Group orders by the year and the month and sum up to get the sales of each month.

A5: Sort the data in A4 by the month and the year before we compute the year-on-year comparison. Complete code should be =A4.sort(m,y). But since A4 has been sorted by the year, here we just need to sort it by the month, that is A4.sort(m), which has a better performance. 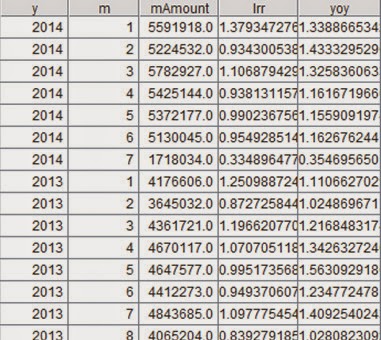 A9: Return the result.

This block of code can be called by Java using esProc JDBC to get the final result (the above esProc program will be saved as test.dfx). The code for this is as follows:
// create a connection using esProc jdbc
Class.forName("com.esproc.jdbc.InternalDriver");
con= DriverManager.getConnection("jdbc:esproc:local://");
// call the esProc program (the stored procedure); test is the file name of dfx
st =(com.esproc.jdbc.InternalCStatement)con.prepareCall("call test(?,?)");
// set the parameters
st.setObject(1,"2011-01-01 00:00:00");//begin
st.setObject(1,"2014-07-08 00:00:00");//end
// execute esProc stored procedure
st.execute();
// get the result set
ResultSet set = st.getResultSet();

It is the same way in which esProc accesses Hive and other ordinary databases. Just configure their JDBC while detailed process is omitted here.
发贴者 Unknown 时间： 6:51 PM