It is not difficult for Java to access HDFS through API provided by Hadoop. But to realize computations, like grouping, filtering and sorting, on files in HDFS in Java is troublesome. esProc is a good helper in Java’s dealing with these computations. It can execute the access to HDFS too. With the help of esProc, Java will increase its ability in performing structured and semi-structured data computing, like the above-mentioned computations. Let’s look at how it works through an example.

The text file employee.gz in HDFS contains the employee data. You are required to import the data and select the female employees who were born on and after January 1st, 1981. The text file has been zipped with gzip in HDFS and cannot be loaded to the memory entirely.

First, you should develop and debug program in esProc’s Integration Development Environment (IDE). The preparatory work is to copy the core packages and the configuration packages of Hadoop to “esProc’s installation directory\esProc\lib”, such as commons-configuration-1.6.jar、commons-lang-2.4.jar、hadoop-core-1.0.4.jar（Hadoop1.0.4）.

Because esProc supports analyzing and evaluating expressions dynamically, it will enable Java to filter the data in HDFS file as flexibly as SQL does. For example, to query the data of female employees who were born on and after January 1st, 1981, esProc will use an input parameter “where” as the condition, as shown in the figure below: 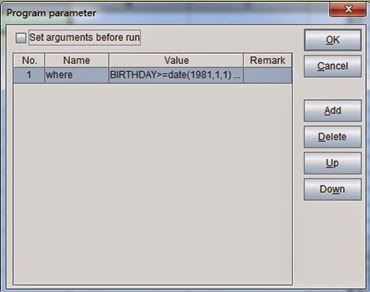 A1: Define a HDFS file object cursor with the first row being the title and tab being the default field separator. The zipping mode is determined by the filename extension. Here gzip is used. esProc also supports other zipping modes. UTF-8 is a charset, which is a JVM charset by default.

A2: Filter the cursor according to the condition. Here macro is used to realize analyzing the expression dynamically, in which “where” is the input parameter. esProc will first compute the expression surrounded by ${…}, take the computed result as the macro string value and replace ${…} with it, then interpret and execute the code. The final code executed in this example is =A1.select(BIRTHDAY>=date(1981,1,1) && GENDER=="F").

A3: Return the cursor. If the filtering condition is changed, you only need to change the parameter “where” without modifying the code. For example, you are required to query the data of the female employees who were born on January 1st, 1981, or of the employees in which NAME+SURNAME is ”RebeccaMoore”. The code for the value of “where” can be written as BIRTHDAY>=date(1981,1,1) && GENDER=="F" || NAME+SURNAME=="RebeccaMoore".

The code for calling this block of code in Java with esProc JDBC is as follows (save the esProc program as test.dfx and put the Hadoop jars needed by HDFS in Java’s classpath):
// create a connection using esProc jdbc
Class.forName("com.esproc.jdbc.InternalDriver");
con= DriverManager.getConnection("jdbc:esproc:local://");
// call the program in esProc (the stored procedure); test is the file name of dfx
st =(com.esproc.jdbc.InternalCStatement)con.prepareCall("call test(?)");
//set the parameters
st.setObject(1," BIRTHDAY>=date(1981,1,1) && GENDER==\"F\" ||NAME+SURNAME==\"RebeccaMoore\"");// the parameters are the dynamic filtering conditions
// execute esProc stored procedure
st.execute();
// get the result set, which is the eligible set of employees
ResultSet set = st.getResultSet();
发贴者 Unknown 时间： 6:30 AM