Sometimes you need to reference data sources dynamically through a parameter, merge data sources into one, or dynamically pass data source name to a subreport/Table control.Often reporting tools - especially those with support for single data source, such as BIRT and Jasper –have to use a high-level language to accomplish these requirements, or trade security for reduced complexity.

However, they can work with esProc (free edition is available) to offset their disadvantages. esProc encapsulates a large number of functions for handling structured data, supports parsing expression dynamically and handling computations involving multiple data sources, and creates dynamic data sources with simple scripts. In addition, it provides simple and easy-to-use JDBC interface through which a reporting tool gets the result of executing esProc script, which will be recognized as a database stored procedure and receive parameters from the reporting tool.

Below is structure of integration of an esProc script and a reporting tool: 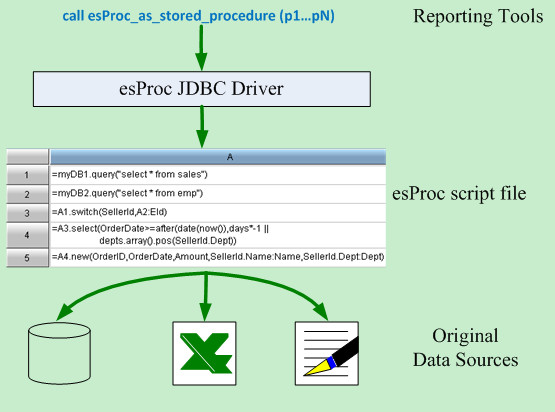 Now, through an example, let’s look at the basic process of esProc’s switching data sources using the parameter:

myDB1 and oraDB are data sources that point to different databases. Each holds a sOrder table with the same structure. The report requires connecting to data sources dynamically via a parameter, querying sOrder for orders whose amounts are greater than 1,000, and displaying them.

Below is a selection from the sOrder table in myDB1:

Here is a selection from the sOrder table in oraDB:

Both pSource and pAmount are report parameters. pSource represents the data source name; ${…} indicates parsing a string or a string variable into an expression. pAmount stands for the order amount.

When pSource=“myDB1”, A1 has the following result:

When pSource=“oraDB”, A1 gets this result:

As a professional tool for handling data sources for reporting tools, esProchas more abilities, which you’ll see in the following cases.

The mySQL database stores a Sales table holding orders from different sellers per day. Its SellerID field contains seller numbers. In MSSQL database there is an emp table of seller information in which EID field contains seller numbers. Create a report to display order numbers, order dates, order amounts, seller names and their departments, based on the condition that the orders should be within the last N days (say 30 days) or belong to certain important departments (say Marketing and Finance). Below are selections of the original tables:

A3: Replace A1’s SellerID field with the corresponding records in A2 according to the key field EID. The result is as follows (the data items in blue contain sub-members): 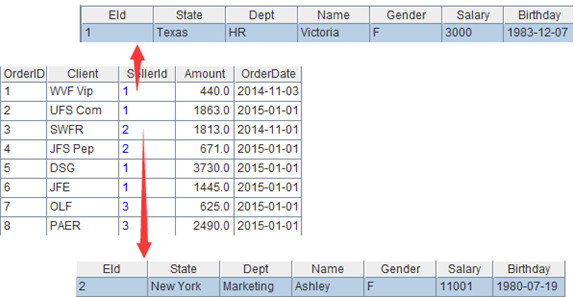 By default, when there is not a corresponding record in A2 for a SellerID value, switch function retains the A1’s record while the SellerID shows an empty value. The effect is like a left join. Use @i option if you want to perform an inner join. The code is A1.switch@i(SellerId,A2:EId).

A4: Filter on the result of join. The first filtering criterion is that orders are within the last N days (this corresponds to parameter days),whose expression isOrderDate>=after(date(now()),days*-1). The second one is that orders belong to several important departments (this corresponds to parameter depts), whose expression is depts.array().pos(SellerId.Dept). The operator || denotes the logical OR operation.

after function calculates the relative time duration. array function splits a string into a set using delimiters. posfunction locates a member in a set. SellerId.Dept means Dept field in the record corresponding to SellerID field.

Both days and deptsare parameters transferred from the reporting tool. Suppose their values are respectively 30 and “Marketing,Finance”, then A4’s result is as follows:

A5: Get the fields of interest from A4. Here is the final result:

Result sets ds1 and ds2 have the same structure, but they come from different data sources – MySQL and a text file respectively. Now concatenate them and display the result in a cross table. Below is the original data: 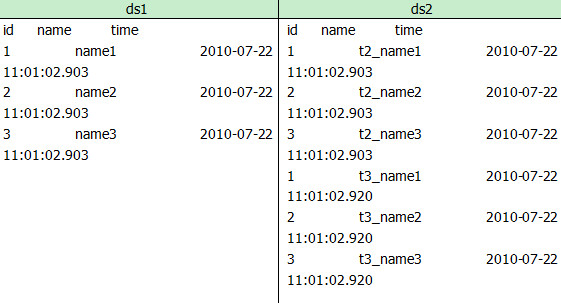 A3: Concatenate the two data sets. The reporting tool’s work is just to create a simple cross table based on the resulting one data set.

For a reporting tool that can support only one data source, if the reporting requires different data sources for the main report and the subreport, it needs to pass in the database URL explicitly or use Java classes to combine the different data sources into one. The former approach is vulnerable to security problems and the latter one produces complicated code. esProc, however, is able to cope easily. Here is an example.

Build a report with a subreport to display order information of sellers whose salaries are within a certain range. The main report’s data source is an emp table (in MySQL database) and the subreport’s data comes from a sales table (MSSQL database).

A1: Query the emp table in MySQL database by the salary range.

A1: Rrtrieve orders records from the sales table in MSSQL database according to employee IDs. Suppose eid=1, the result would be:

You can see that the two data sources have been joined into one source with esProc. The reporting tool just needs to call the corresponding esProc script for the main report and the subreport.

Some reporting systems do support multiple data sources. But it is hard to handle reports with different and changeable data sources. In that case, using esProc to generate a single data source can make the handling work easier.

For the same reason, another reporting problem can be solved through esProc’s single-data-source solution. That is the “multiple subreports, multiple data sources” problem, which means there are many subreports (or table controls) within one report and each has its own data source.

Perform dynamic join between main report and its subreports

A main report may use many subreports whose data sources come from multiple databases. The reporting needs to display the result of dynamic join between these data sources and the one the main report uses. esProc implements the task in a simple way. For example:

A1:Execute the SQL statement to retrieve data from the org table in Master data source. arg1 is a parameter passed from the reporting tool. When arg1=”ORG”, the result would be:

B2: Get the data source name for each record according to its org_id field. The result during the first loop is “S_odaURL”.

B3: This is the explicit connectionto corresponding data source.

B4: Filter on data in the User table.

B5: Append three columns, which derive from the main table, to B4’s subtable. The result during the first loop is:

B6:Concatenate B5’s result into B1. The operator “|” is equivalent to union function. When the loop is over, B1 will have collected all data the reporting needs, as shown below:

A8: Return B1 to the reporting tool explicitly. The default execution is to return the result of the last cell.

A5:Loop through A1 to calculate the sales amount of each time interval. “~” represents the current member and “~[-1]" represents the previous one. In the case of unitType="day", a one-field result set containing 12 records will be generated.

A6:Return A5 to the reporting tool via JDBC. Then you can plot the graph to show the data.
发贴者 Unknown 时间： 2:49 AM