You can perform data sorting in both the report script and in SQL. But both are only capable of sorting data by specified field(s). To sort data by a specified list, you have to compose the code using functions like decode and union. If the sorting criterion is a dynamic parameter, it’s more difficult to implement it in SQL or with a report script as a temporary table is usually needed. What’s worse, the sorting criterion doesn’t always correspond to the field values completely. Sometimes you need to fill in the difference, while other times you can just ignore them. It’s rather complicated in handling both issues.

With support of alignment functions, order-related computations and explicit sets, esProc can easily solve the sorting problems mentioned above. So you can use it as the tool for report data source preparation. The reporting tool regards an esProc script as the stored procedure, passes parameter to it and gets the returned result after execution through JDBC. For more details, see Howto Use esProc to Assist Reporting Tools.

Here are the sorting problems concerning external/dynamic criterion commonly seen in report development, and their solutions in esProc.

Sort the Service table according to the condition that the aNum field will be presented in an order specified by [1,3,2,4], as shown by selections of source and target tables below:
esProc code:

A1 performs a SQL statement. The align function groups and sorts records according to the specified list, with the default rule that only the first found record is retained; but with @a, the function will retrieve all records in a group. The conj function concatenates records together.

2. If there are fewer items in the list than the aNum field values, such as arg_List=[1,2,4], records that don’t have matching items will be discarded by default, as shown by the following result: 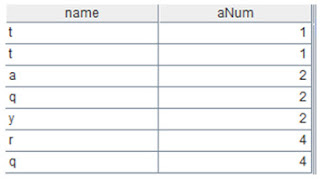 To append those mismatched records after the sorted ones, use A2=A1.align@n(arg_List, aNum).conj() and the result is as follows: 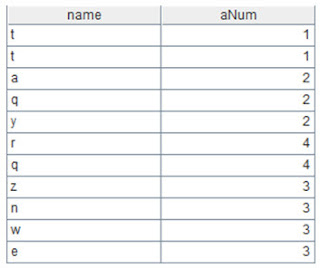 Or you can use the equal statement - A2=A1.align@s(arg_List, aNum).

3. If the items of the list outnumber the field values, the extra items won’t appear in the sorting result.

Suppose we need to sort the database table PRODUCT for presentation. Instead of performing the sort by a field, the requirement is that the top N records be sorted in the specified order and the rest by an existing field, as shown in the following selections of source table and target table:
esProc code:
The align groups and sorts data according to the specified list, and @s adds the mismatched records at the end. The above target table can be obtained when arg_IDList is [300,400,100,200].

There are a lot of records in Table1 where ID field is a sequence consisting of inconsecutive integers. Now we need to find those missing integers and put them in the right places in Table1, while leaving corresponding fields in blank. Below is a selection of the source data:
If the set of integers is small, we can generate a sequence with consecutive numbers in SQL with the minimum and the maximum values, compute the difference between this sequence and the ID field values using a subquery, then create empty records and union with the original data, and finally perform a sort. But if the set is big, we need to look for a workaround for implementing the merge algorithm to increase the performance. As a result, the code becomes complicated. esProc supports a direct merge by fields, and thus can produce the following code:
The m function can get members of a set by their sequence numbers in both normal and reverse orders. A1.m(1) an be simplified as A1(1). The to function generates a consecutive sequence. The merge function merges ordered data, and it works with @u to get the union. Here’s the result: 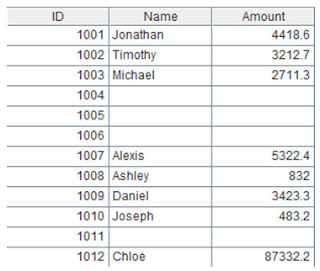 Intra-group sorting in a fixed order

The attendance table records the attendance information. The requirement is to convert each person’s information per day (a fixed 7 records) to two rows - one is morning and the other is afternoon for reporting. For each row, Per_Code, Date, In and Out fields are the same but Break and Return fields are not. Below is the attendance information of a person on a certain day:
According to this data, we should retrieve the 4 records of the morning by the specified sequence numbers and then transform them to a single record with static method. The operation will be performed on records of both morning and afternoon separately. There are a lot of real world cases that involve this kind of order-related algorithm. But as SQL lacks the intrinsic sequence numbers, it turns to pivot and over methods or the like. The problem is the composed code is difficult to understand and debug.

esProc code:
A3 retrieves record 1, 7, 2 and 3 from each group. A4 joins and converts the four records into a single record and stores it in the empty two-dimensional table sequence AM. ~ represents the current group, # represents a sequence number in a group, and | concatenates records together.


Here’s the result for a person on a certain day: